On Sunday the 24th of March I left England for a seven day trip to Malta. It was the first proper holiday I'd taken in around 20 years and naturally, since photography is my hobby, I took a camera: my Fuji X-E1 and the Fuji XF 35mm f⁄1.4 lens. I also have an X100 and the 18–55 lens, but I took only the 35 for two reasons: first as a sort of experiment, to see if I could get by with just that focal length, and second because of concerns over size and weight, since I'd be carrying the camera pretty much everywhere with me, potentially in much hotter weather than I'm used to. I'll have more to say about the equipment decisions in a later post.

Almost all the photos in this series are JPEGs from the X-E1; a few are raw conversions done in Aperture. 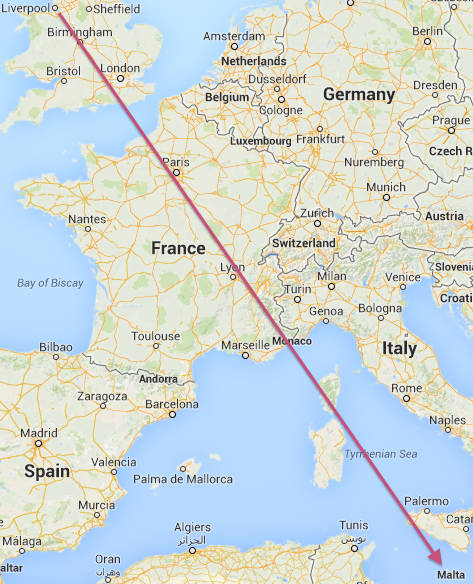 A couple of days after I booked my plane tickets, Zoe found out she'd got an interview with a school down in Lowestoft, the Monday after I was to leave. I would have liked to go with her, but such is life; thankfully her parents offered to drive down with her, so at least she had some company.

Update: she got the job!

My flight was at 09:35 which meant an early start to the day in order to arrive in time. Unfortunately, the weather hadn't yet realised spring was here, so it was cold, wet and windy, which made standing in a sheet-metal tunnel thing whilst waiting to board the plane not the most pleasant experience I've ever had. 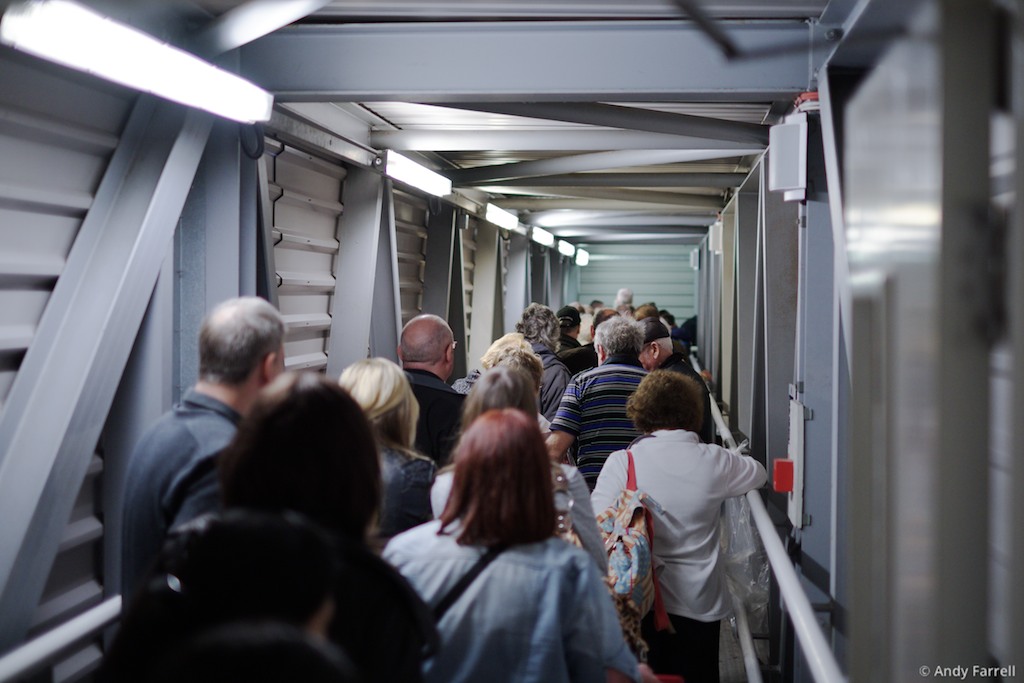 Thankfully we didn't have to stand in there for too long before being allowed to proceed.

The last time I was on a plane was a few years ago for a weekend in Amsterdam, and as before I found the acceleration and other forces quite fascinating, sort of like being on a rather tame rollercoaster, albeit one that makes your ears pop. I was most grateful to score a window seat, too – I think it will be many more plane rides before my fascination with the whole procedure dulls; many things, such as the arrows on the wing root indicating where to go in an emergency, still retain novelty value.

It's odd how tiny and insignificant everything on the ground looks, and yet it's also doesn't seem as small as I'd expected, even once we'd climbed high enough to be above all the various cloud layers. The lowest of those clouds put me in mind of my wool jumper: bobbly and surprisingly regular.

There wasn't much to see out of my window, unfortunately, except a plane wing and absolutely clear blue sky. 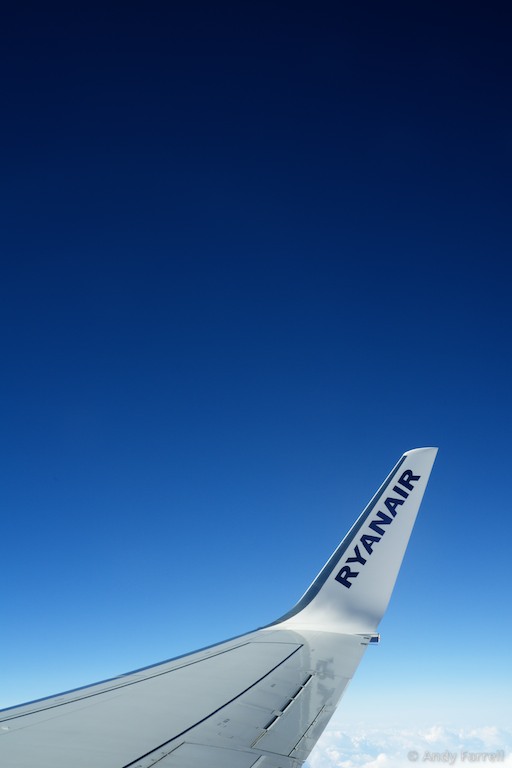 Even for an inexperienced plane journeyer such as me, endless blue sky gets a little boring after a while, so I read on my Kindle until we began our descent, three hours later. That said, every now and then I'd still get distracted and wistful, gazing out into the atmosphere and occasional majestic sweeps of cloud below us.

Yet more interesting sensations as power was reduced to the engines and I felt the deceleration immediately and more strongly than expected, shortly followed by the quease-inducing sub-1g as we began our descent through what would turn out to be an overcast sky.

The coastline of Malta is mostly rocks and cliffs – there aren't actually many beaches, and none of them particularly large, either. Aside from the beaches, one thing really made real the feeling I was in (well, over) a foreign land: the colour of the buildings. They're almost all made of the native pale yellow limestone of which the island is primarily formed, and painted within a limited range of colours. Dry stone walls abound. 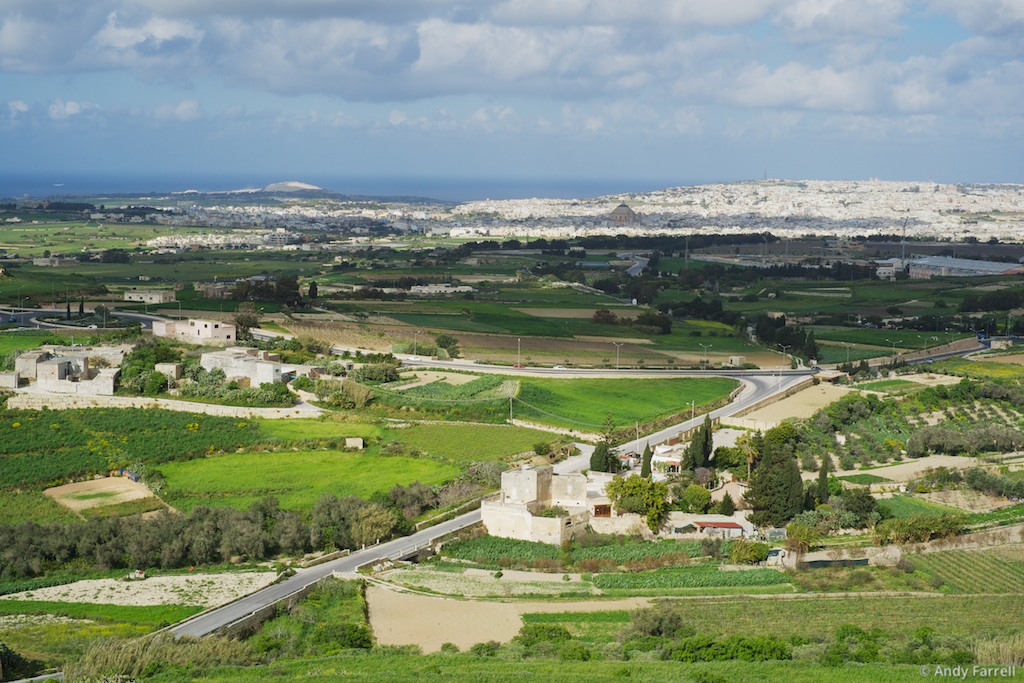 Since I arrived on a Sunday, bus service wasn't especially good, even by local standards. Still, eventually the right one showed up and my parents and I headed to Marsaskala for some much-needed lunch – it'd be the first thing I'd eaten since a meagre sandwich seven hours earlier. 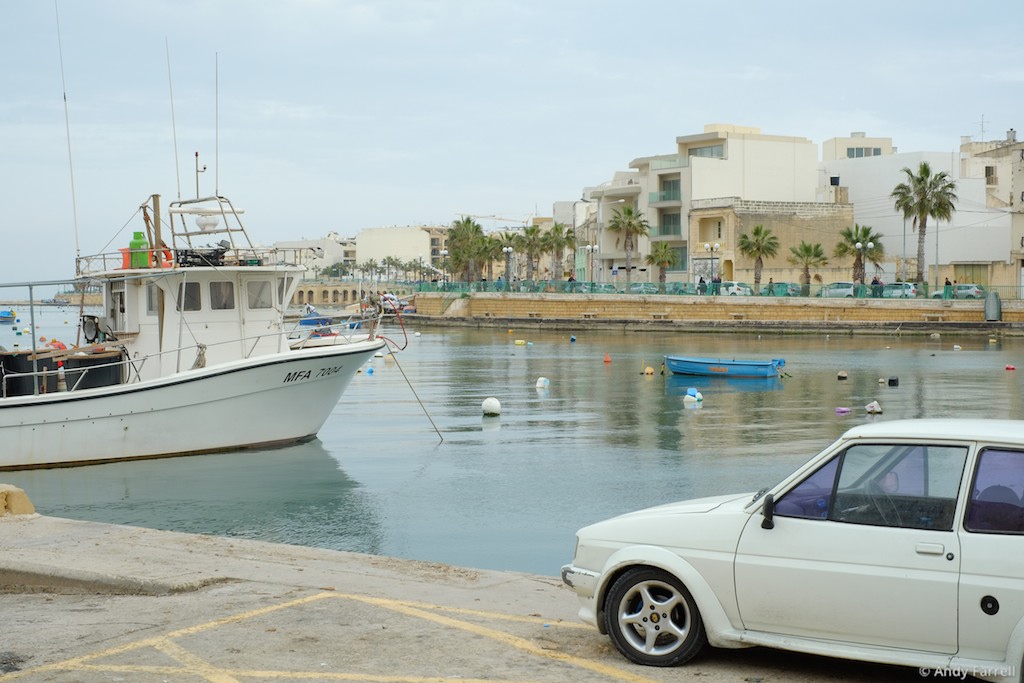 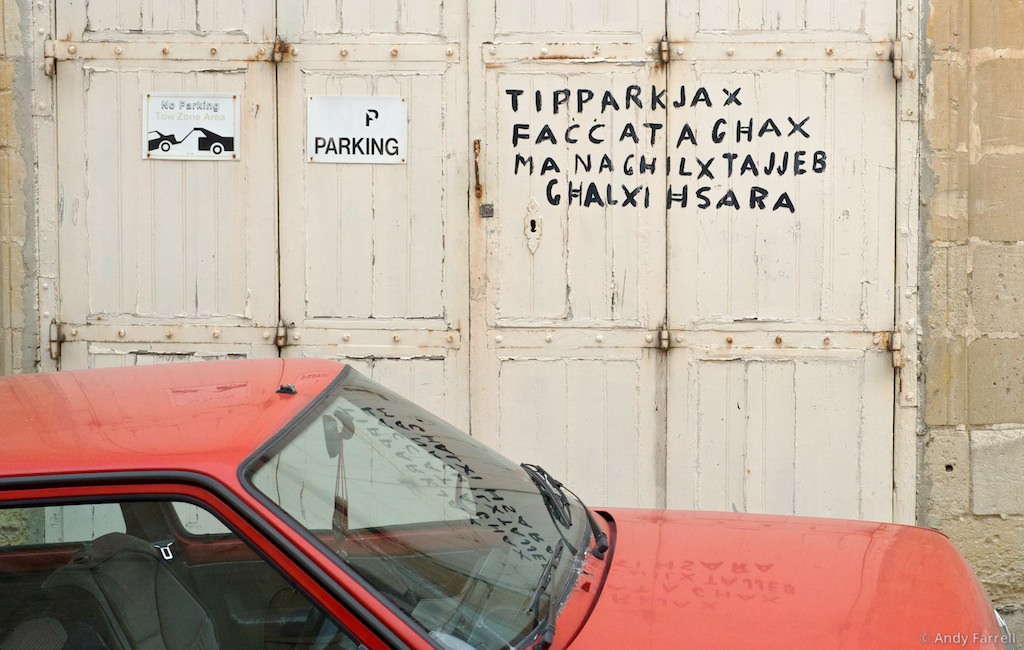 I tried to use Google Translate on this, but I don't know where the word spaces are

Travelling always seems to sap my energy, so by the time we got back to my parents' flat at 18:00 or so I was about ready to crash, thus ending my first day in (on?) Malta.